Steve Buckley, a sports columnist for the Boston Herald, gives his picks for summer reading, mostly baseball with some older titles mixed in with more recent ones. His list includes Clemente: The Passion and Grace of Baseball’s Last Hero, by David Maraniss; Opening Day: The Story of Jackie Robinson’s First Season, by Jonathan Eig; Ted Williams: The Biography of an American Hero and The Big Bam: The Life and Times of Babe Ruth, both by Leigh Montville; Joe DiMaggio: The Hero’s Life, by Richard Ben Cramer; License to Deal: A Season on the Run with a Maverick Baseball Agent, by Jerry Crasnick; Wait Till Next Year: A Memoir, by Doris Kearns Goodwin; and Big Papi: My Story of Big Dreams and Big Hits, by David Ortiz with Tony Massarotti.

KPBS, the public radio affiliate in San Diego, presented two recent baseball-related segments, one featuring Frank Deford, author of The Entitled, a new baseball novel (the audio interview is linked to the page) and another on The Card: Collectors, Con Men, and the True Story of History’s Most Desired Baseball Card, by Michael O’Keeffe (audio here).

FYI — According to an article in the August 2007 issue of Population Research and Policy Review, the average Major League Baseball career is 5.6 years.

** A review of The Cheater’s Guide to Baseball appears on The Pastime blog. 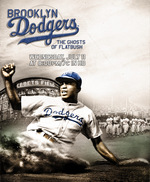 Brooklyn Dodgers: The Ghosts of Flatbush, based loosely on Through a Blue Lens: The Brooklyn Dodgers Photographs of Barney Stein, 1937-57 (premieres July 11). The Dodgers played their last game in Brooklyn fifty years ago, and every baseball book fans knows the significance of major anniversaries. See here for a a BaseballBookshelf profile of Stein’s daughter, Bonnie Crosby, following her program (with co-author Dennis D’Agostino) at the Yogi Berra Museum.

** The Day, out of London, Conn. offers this profile of Jonathan Mahler, author of Ladies and Gentlemen, The Bronx is Burning, which is the subject of an ESPN miniseries beginning July 10 at 10 p.m. The early buzz is not promising (although TV Guide‘s Matt Roush hails it as something even non-Yankee fans will enjoy), from either a baseball or theatrical point of view. Oliver Platt as George Steinbrenner? Stick a pair of prosthetic ears on John Turturro to turn him into Billy Martin? Add a cast of no-name supporting actors

(Daniel Sunjata as Reggie Jackson? Eric Jense as Thurmon Munson? See picture.) and you have to wonder whether this can really sustain any interest over eight episodes. According to IMDB.com, Pratt/Steinbrenner appears in all eight, but Turturo/Martin only two? Even the characters who portray the players get more screen time, and Martin was a major player in that hectic season of 1977. See here for a BaseballBookshelf profile of Mahler and fellow-Wall Street Journal scribes Seth Mnookin (Feeding the Monster) and Joshua Prager (The Echoing Green).

** Former Times sportswriter Gerald Eskenazi reviews **** and Baseball, Volume I: Entering the American Mainstream, 1871-1948, by Burton A. Boxerman and Benita W.Boxerman in The Forward, a weekly Jewish publication. See here for a BaseballBookshelf profile on the authors.

Opposing reviews for Jonathan Eig’s Opening Day. Pro and Con. And an interview with the author.

This just in from Onion Sports: Aaron credited with 50 "lost" home runs.

I usually don’t consider this type of book, but I was intrigued by the press release. There’s a new bio due out about Phillies’ slugger Ryan Howard. Titled Ryan Howard: King of Swing, 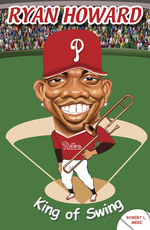 it’s marketed for "fans of all ages." But one look at the cover indicates it’s not on an editorial par with say, The Teammates. Other self-referential accolades include:

Think I’ll wait for the movie to come out.

Newsday’s review of THE CARD: Collectors, Con Men, and the True Story of History’s Most Desired Baseball Card, described as a "compelling tale" by Robert L. Fouch.

RickLibrarian offers a review on Baseball Haiku. In my "day job" as editor of the Real Life page for the NJ Jewish News, I write a weekly haiku on the week’s reading from the Torah. While it has been generally wel-received since I started it (save for the rare reader who thinks they’re blaspehmous), I find poetry, like fiction, extremely subjective, which is why I rarely review novels or poems. Nevertheless, I did review Line Drives, a collection of poems edited by Tim Wiles of the Baseball Hall of Fame in Cooperstown for ForeWard Magazine.

The Glory Days… explores how and why New York City came to dominate the sport, how this changed by 1957, and how the events of these eleven seasons shaped today’s game. In addition, the exhibition uses baseball as a lens through which city life in the post-war years is examined, and contextualizes baseball’s dominance in the history of the city."

The exhibit opens June 27 and runs through Dec. 31.

The Baseball Toaster’s "Griddle" Page offers this review of The Gashouse Gang, by John Heidenry.

Since newspapers often wind up on my bookshelf (what can I say, I’m not the best housekeeper in the world), here’s a piece from the New York Observer on the recent Alex Rodriguez affair. Well perhaps affair isn’t the appropriate word in this case. Anyway, it’s an interesting examination of how the sports media is turning into gossip columnists, contrary to "back in the day," when Babe Ruth could practically host an orgy in the hotel fountain and you’d never find a word about it in the next day’s newsprint. Houston Astros catcher Brad Ausmus contributed an article to June 18 issue of ESPN The Magazine on the omnipresent demands of an omnivorous press.

"In an open-locker-room, scoop-hingry sports world, where have all the boundaries gone?" reads the sub-title.

Yet Ausmus seems to believe the blame does not fall entirely on the press.

"I know every news story can’t be rosy. That’s not reality," he writes. "And there’s little we can do to stem the growing intrusion of the press. So until newspapers stop printing, ESPN stops broadcasting, and the Internet disappears, maybe some of us just need to develop thicker skins. Or do what many athletes do: don’t pick up the newspaper, turn on the TV or listen to talk radio."

Collectors, Con Men, and the True Story of History’s Most Desired Baseball Card. a fascinating and disturbing look at the decline of the baseball card industry, by Michael O’Keefe and Teri Thompson. For those of us of a "certain age," card collecting was a fun hobby, not an investment opportunity.

I started collecting in earnest in 1967, when a pack of cards was only a nickel and most of the players sported crew cuts. Of particular interest were the inserts that came with the regular cards. One year it was mini-posters; another it was peel-and-stick team logos. And while I can’t use the excuse that my mother threw out my collection, they did get lost somewhere along the way.

I no longer have most of the cards. In their stead is one of my most treasured books is the Topps Baseball Cards: The Complete Collection, a 35 Year History 1951-1985. (I dislike the overuse of the word "complete" in a title, unless it’s something that will absolutely not be added to, such as The Complete Works of Shakespeare. Obviously, Topps has continued to print cards, rendering the use of the word incorrect and misleading.) Even now, it’s a source of nostalgia to look through the old cardboards.

It’s bad enough having to have books by marginal and not-so marginal players, but to have their "associates" feel the necessity to tell their own story? Jose Canseco’s wife, Jessica, writes her answer to his tell-all Juiced with Juicy: which TheBookStandard.com wesbite calls a "concoction of sex, drugs and money." 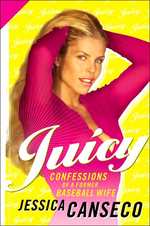 Confessions of a Former Baseball Wife,

I have little patience for hangers-on (though I hate using that term when speaking of someone’s spouse, although in the case of some celebrity unions it seems apt enough) who try to make a buck off their association with celebrities:

But Jessica Canseco sees her story as one of transformation. So transformative, in fact, that the innocent little country girl with the generous endowments would grow up to be this month’s Playboy covergirl, as sport-sexy on the cover as she can be…

The article also includes an interview with Jessica. Asked how her family reacted to the book, she replied:

My family is very small and very supportive. It’s a pretty amazing story, and shocking, and they’re fine about it.

Especially the parts about her three-somes, no doubt.

This example of several exchanges in the brief interview, makes me wonder if Mrs. Canseco ever read a book, let alone wrote this one herself.

Q: In this month’s issue of Playboy, you appear in Oakland A’s gear [the team for which Canseco helped take to the World Series in 1988 and again in 1989]. Where did that idea come from?
A: Just because that’s how people know Jose—from the A’s. That was their idea. It’s pretty clever, I guess.

Other items of note:

Peter Golenbock’s 7 finally gets reviewed by The New York Times.

In Bull Durham, the late Max Patkin — the "clown prince of baseball" playign himself in the film — is talking up Crash Davis (Kevin Costner) to Annie Savoy (Susan Sarndon), telling her what an unusual guy he is. "I actually saw him read a book once," Patkin says with a touch of awe, adding that the publication didn;t even have pictures in it.

Meet Matt DeSalvo, the latest in a stream of Yankee rookie pitchers, and subject

of a recent New York Times article by Tyler Kepner for the simple fact that the young man actually reads!

The budding bibliophile — who has a list of 400 books he wants to read before he dies — pitched well in his debut, a no-decision in the 3-2 loss to the Mariners in which he game up one run on three hits in seven innings. He won his first game five days later, again in a game against the Mariners, giveing up two runs in 6.1 innings.

As if to show how much of an anomaly DeSalvo must be, Kepner puts his hobby in context:

"He is halfway through the list already, having devoured 17 books during spring training alone. Teammates marvel at this.

“For me to read a 200-page book,” said the reserve catcher Wil Nieves, who caught DeSalvo in the minors, “it would probably take two years.”

More on DeSalvo from the blog, BookChase.

Normally, I reserve this blog for the written word on the national pastime. Once in awhile, however, I come across an item that extends beyond this limited scope.