I was at my local supermarket this afternoon and saw a shocking site. Not the $1,400 / pound for truffles, but the New York Yankees Yearbook mixed in with the magazines.

I’m old enough to remember when you could only buy these publications at the ballpark. Somewhere I still have the Mets and Yankees issues from the mid 1960s. They consisted of player profiles and statistics, with a couple of pages of action photos, maybe an interview or two, all packed into an economical 72 pages or so. They even used to revise them mid-way through the season. Cover price: 50 cents.

This year’s  edition weighs in at more than 300 pages, and, acco 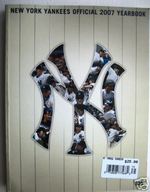 rding to a review on eBay, weighs more than three pounds. It looks more like an issue of Vanity Fair than a sports publication. Since the proud history of Yankee Stadium is about to be plowed assunder, there’s a tribute to Monument Garden, among other articles.

Cover price for the 2007 Yankee yearbook? $25. You can do the math, but I’m just guess that’s way more than the regular rate of inflation.

And they wonder why they’re losing fans?

Baseball Digest has been a staple since 1942. Each month, stories from around the country have found their way into the compact publication.

Nowadays, of course, the concept and presentation seem as anachronistic as single-admission doubleheaders.

The articles within, by necessity, must be of a relatively timeless, rather than timely, nature, meant to be savored for their historical and cultural properties rather than used to catch up on the latest news.

I wonder what demographic constitutes the readership of Baseball Digest? Most of the stories are written in an “old-fashioned” mien, as opposed to the features that appear within the pages of Sports Illustrated and, more recently, ESPN, The Magazine.

<p</pBD traditionally ran their “rookie ratings” in the March issue. I still have the 1969 issue, which features Dusty Baker, Bill Russell, Amos Otis, Larry Bowa, Al Oliver, Graig Nettles, Bobby Mercer, and Rollie Fingers, as well as dozens of players you probably never heard of (a two-year subscription, plus four free issues, was $7 back then). Similarly, the April issue was the prize, featuring the “opening day special,” with rosters and other statistical information. Of course, that was in the pre-Internet/sports cable days where such data is up-to-the-minute.

Each issue offers a group of standard features. My favorites over the years have been the letters to the editor. A writer will often inquire about a particular game he might have seen fifty years prior, giving the skimpiest of details and asking for more information. Other will inquire about certain records, or merely voice a complaint of omission. Other regular features include an examination and examples of interpretation of a particular baseball rule, and the often-humbling ten-question quiz.

There’s something charming, leisurely about thumbing through an issue. Same for The Best of Baseball Digest. John Kuenster, the publication’s editor for more than 30 years, compiled this collection which more than lives up to the hype of such a lofty title. Within these 450 pages, he offers a smattering of the greatest baseball writers in history, including Red Smith, Heywood Broun, Arthur Daley, Jimmy Cannon, Leonard Koppett, Roger Kahn, Jim Murray, Mike Royko, and dozens more. Each piece includes the year of publication for context.

BD was also the launch point of oral history, predating books such as The Glory of Their Times by presenting “as told to” tales from such personalities as Stan Musial, Casey Stengel, Don Larsen, and George Sisler, as way as dozens of profiles on layers recent and more distant.

The range of topics is also spellbinding: “Stealing Home is Not for the Faint of Heart,” “First Base: The Game’s Social Hub,” “Here’s the Quickest Way to Be Ejected from a Game,” and “The Persuasive Healing Powers of Baseball Trivia.”