In a previous post, I wrote that The Sporting News would no longer be printing 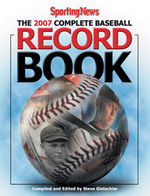 it’s annual baseball record book. True to their word, however, they have made it available on-line at no charge. The sections, rendered as PDF files, are divided into an Introduction and user’s guide; regular season (yearly leaders, career milestones, general reference, and AL and NL team records); Division Series; Championship Series; and World Series; and All-Star games.

(Full disclosure: I contributed the section on the Washington Nationals/Montreal Expos.)

In this corner, wearing a red cover, Who’s Who in Baseball. In the other corner, changing many times over the years, The Baseball Register published by The Sporting News.

Who’s Who in Baseball

WWIB has been around for more than 90 years. The format has basically remained unchanged: a list of "traditional" stats for a player’s enitre career (minor, major, and foreign leagues) along with a thumbnail photo. It also makes not of his league-leading accomplishments, as well as major awards won (MVP, Rookie of the Year, Cy Young, but no Gold Gloves). If the player has been fortunate enough, his post-season stats are also listed.

One of the unique features is inclusion of time spent on the disabled list, which accounts for large chunks of games missed and.or unexpected trips to the minors (for rehab assignments).

undergone transformations over the years. One of the more expensive of the publisher’s titles, it was a rich man’s version of WWIB and contained pretty much the same format. But it had a more concise layout, iisting awards and statsitical highlights of the players’ careers, hobbies, colleges and degrees, where applicable and whether they were related to others athletes. Managers anc coaches also received props in their own section.

Over time, of course, TSN made some changes, often based on the bottom line:

An acquaintance with intimate knowledge of TSN’s editorial policy acknowledges that it has become almost a given that the industry caters more and more to younger readers and fantasy fanciers. "As for catering to young people, well, that’s where the money is, apparently. [The] books have fallen by the wayside because sales have been decreasing for years."

By the way, the claim of "every stat" on this year’s edition is obviously erroneous, since they omit several of the newer numbers that have become commonplace for roto-heads and sabremetricians in recent years.

Following up on a previous post where I listed all the 2007 annuals being published in book form, I thought I’d publish a list of the 2007 baseball annual magazines available on the newsstands. For those who don’t have a decent newsstand nearby, I’ve also placed links to web sites where (some of) the magazines can be purchased. (Many, but not all the sites offer the magazines for the same price you’d pay for them on the newsstand with no shipping charge. Booksamillion.com, the only site to sell several of the publications, offers free shipping only on orders over $25).
Several of the magazines let you choose from many different regional covers. I am currently trying to write reviews of these for my website, but some I just never see or get. If I had to recommend particular magazines from each of the two genres, I’d probably go with Lindy’s Baseball Preview and Fantasy Baseball Index as my first choices, and Sporting News Baseball and the Fantasy Baseball Guide Professional Edition as my second choices.

Also, note that the titles on the covers of the magazines are often somewhat different than the title by which the publishers call the magazines (I have no idea why)

ESPN, The Magazine also usually publishes an issue focused on fantasy baseball in March. Major League Baseball did not publish its own annual last year; I do not know if they plan to publish one this year.

The New Ballgame: Understanding Baseball Statistics for the Casual Fan, by

A brief review of a brief book.

Guzzo does a nice job explaining the key stats to newcomers to the game who want to enhance their experience by adding that numerical component, rather than "just watching."

He also offers an explanation of fantasy baseball, for those who just don’t get what all the fuss is about (present company included). But by adding an histroical perspective — that simulation games have been around for decades, including the popular Strat-O-Matic — Guzzo makes the phenomenon a bit more reasonable. So, were newer statistics such as Runs Created, WIn Shares, and VORP (Value Over Replacement Level) created for fantasy baseball, or vice versa? Either way, it’s another way of looking at the game, so what could be bad?

The author has a nice sense of humor, expecially when he chides broadcasters for using ridiculous factoids ad nauseum during the course of the game. To wit, and quoted at length:

The New York Yankes joined the 1992 Toronto Blue Jays and 2003 Seattle Mariners as the only team since 1976 to win heir first eight day games. Seatle started 17-10 in the daylight that year….

Wow. Drop everything to make it to the stadium today or risk missing the extension — or tragic end — to that streak of daytime wins. Talk about drama…. I mean, if the Yankees can win just nine more consecutive games (emphasis original) …they’ll be just the second team since way back in 2003 to win at last 17 day games in a row. [Writer’s Note: Guzzo mentions that there are many more night games than day games, which somewhat reduces the impressiveness of the feat.]

That sort of statistical noise isn’t even worthy of the term trivia.

TSN had been publishing the Record Book, which went through several variations, for almost 100 years (1909) and began its version of the Guide in 1942; prior to that it had been produced by Spalding.

The hopes are that the publications will appear on TSN’s website (sportingnews.com).

I’ve been meaning to make a list of my baseball library for some time, but found the prospect too daunting. Util recently.

Thanks to Librarything.com, all one has to do is (usually) type in the ISBN number or title and all the info is provided in a nice format of the cataloguer’s choosing. So far, I’ve input over 1,000 titles, not counting magazines, yearbooks, etc., with several hundred more to be entered.

Cataloguing up to 200 titles is free. Anything more than that will cost, as of this writing, either $10 for an annual subscription or $25 for a "lifetime" subscription (whatever that means). It’s any interesting community, seeing who’s reading what, where.

For the curious among you, click here to view my library.